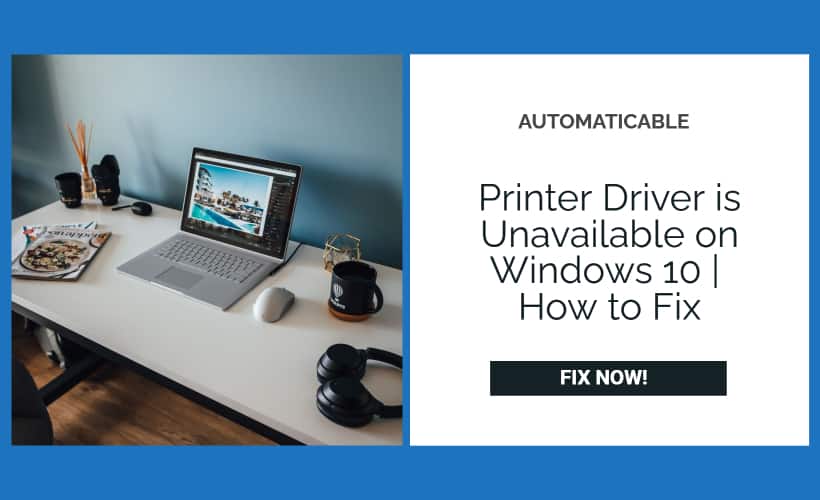 You’ve spent your entire night working on that document which you have to submit the next day in your school or in your office. You sleep peacefully after working tirelessly, thinking that you’ll print the document in the morning. But the next morning, some error occurs, and a message which goes something like – “Printer driver is unavailable” pops up on your screen. You start panicking, looking at how to resolve this error. Maybe that’s how you have arrived here, and we are here to help you resolve this issue.

See also:How to Fix The Directory Name Is Invalid in Windows 10

Printer Driver Is Unavailable : How To Fix?

Step 1 – In the Search Bar present in your Task Bar, type in “Update”

Step 2 – In the right half of the menu that will pop up, you’ll see a “Check for Updates” option. Click on it.

Step 3– Windows will automatically search for updates from its database. Make sure you have a strong internet connection so that Windows can download its update without any problems.

Step 4– Wait for Windows to install the updates on your system once it’s downloaded.

Step 5 – Reboot your system so that Windows can apply the finishing touches.

Once done, try printing your document again, and you should have no problem in printing the document, thus resolving the issue of the printer driver is unavailable. If you’re still facing the same problem, don’t worry! We’ve got plenty of other fixes, so read on. If your print screen button is not working, click here.

Update Or Reinstall Your Printer Drivers

Sometimes the problem is with outdated drivers, which causes the issue of printer drivers being unavailable. All you have to do to fix this issue is to update your drivers. To do this, do as follows –

Step 3 – The new window that has opened just now is known as the Device Manager. Here you can know everything about your device and its working condition. Look for Printers and click that button to unfurl all the printers connected to your device.

Step 4 – Right-click on the printer you’re facing an issue with and then click on Update Driver.

Step 5 – The wizard will search online for driver updates.

Step 6 – Wait for the wizard to update the drivers and then reboot your PC.

Once the reboot is complete, try printing the document again and see if you’re facing the same problem. If the problem persists, your printer drivers you are updating might not be installed correctly. To install the drivers correctly, you just have to make a little tweak in Step 4. Instead of clicking on Update Driver, click on Uninstall Driver. By doing this, your printer will no longer be recognizable by your PC or Laptop but don’t worry.

Reboot your device, and on rebooting, Windows operating system will automatically reinstall the drivers without you doing anything. Try printing your document again, and you’ll have no problems with it and thus resolve the issue of the printer driver being unavailable.

Although this is very unlikely, still sometimes it can cause problems in the communication between your printer and your PC/Laptop. Just perform a full system virus scan of your PC using your Antivirus software, and if there is any malware, the antivirus will quarantine it and get it fixed and hence solve the issue of the printer driver being unavailable.

These were our tips and tricks to resolve the “Printer driver is unavailable” bug. If you’ve followed our tried and tested fixes step by step, you’ll have no problems in fixing this issue of the printer driver being unavailable. You can now get back to printing your documents in no time!